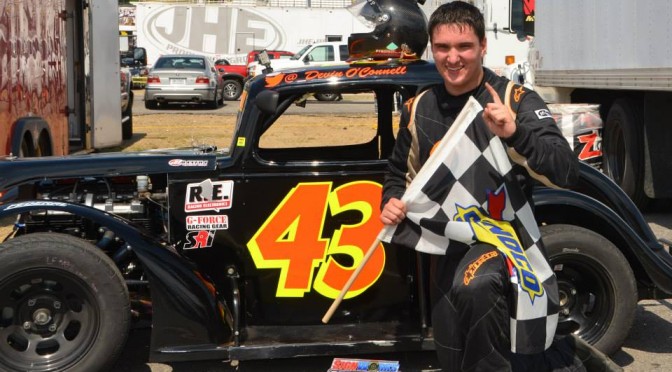 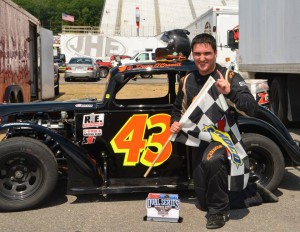 (Loudon, NH) Devin O’Connell won the Granite State Legend Cars, NASCAR Sprint Cup Invitational on Sunday, July 19th.  Devin qualified third and started on the inside of row 2 for the event.  He quickly took over the lead in the opening laps and never looked back during the caution free race.

After the race Devin reported, “We were about 2 1/2 to 3 tenths off.  With the short amount of time we had between practice and the feature, we made an adjustment and hoped it squared the rear end.  That was obviously the trick to do it.  We got out for the feature and the car was absolutely perfect.”

Earlier in the week, Devin competed in round 7 of the Bojangles Summer Shootout Series at Charlotte Motor Speedway. Devin qualified fourth and battled his way to 2nd bt lap 10. The next 15 laps would see the lead change 5 times between Devin and Stevie Johns with Devin falling short at he checker flag settling for 2nd place.

Later in the week, Devin raced at Stafford Motor Speedway in the weekly Friday night series. Devin, the current Legends point leader at Stafford, started at the back of the field due to a problem during qualifying. During the feature race, he worked his way through the field to 2nd place. Unable to complete the pass for the lead, Devin settled for a second place overall finish and the Semi-pro divisional win.