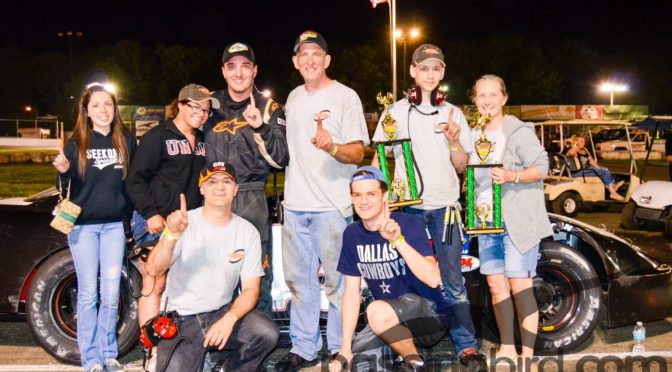 The format of the race was different from the normal 100-lap Granite State feature format. The race consisted of three, 35-lap segment races with the overall winner having the best average finish.  O’Connell qualified fifth for the first segment and finished sixth.

The second segment saw the field of cars inverted resulting in a starting position of eleventh for O’Connell with an eight-place finish.  It would be the third segment that would see O’Connell shine.  He began the third 35-lap segment in third and quickly took the lead and pulled away from the field taking the win by more than a full straightaway.

O’Connell’s average effort netted him overall second place behind Joey Doiron and ahead of Cory Casagrande.

After the race Devin stated, “It feels so good to finally pick one up for the Chatham Highlander Motel, Bilstein Shocks, my family and my crew. Never mind the fact that it’s at my home track that has been my kryptonite tracks for years.”

O’Connell will be on the track next for the Short Track Showdown at New Hampshire Motor Speedway with the Granite State Pro Stock series on June 24, 2018.