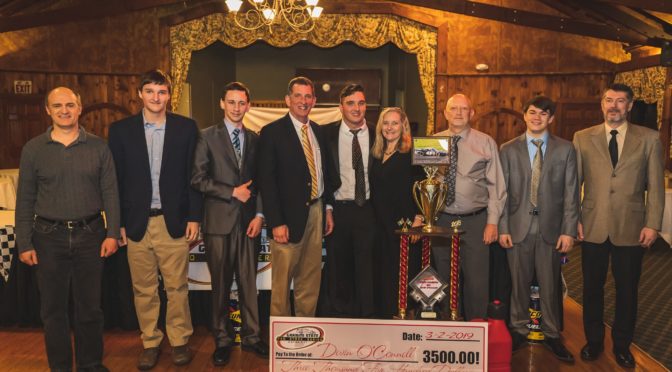 The Granite State Pro stock Series officially brought its season to a close on Saturday March 2 at the Thompson Speedway Motorsports Park clubhouse. The season ending banquet of champions was a chance for the teams of the GSPSS to get together one last time as part of the 2018 season and honor their champion.

Devin O’Connell and his family owned team were officially crowned champions for the 2018 season. At the end of the night they took home the champions share of $22,000 worth of point fund money and contingency prizes. In addition New England Race Fuels stepped up and gave them a champions pack of Sunoco products and American Racer outfitted the team with championship Jackets. O’Connell was extremely gracious in his acceptance speech thanking his team, his family and going out of his way to thank series president Mike Parks. After highlighting several conversations between he and Parks, O’Connell said “Mike has helped me and encouraged me like no one else ever, helping me to mature as a driver and become a champion”. He concluded by thanking his competitors and announcing that he would be back to try to defend his title. O’Connell ended the season with a pair of wins at Hudson Speedway and Monadnock Speedway as well as 6 top fives and nine top tens.

In addition to crowning the champions, a number of specialty awards were handed out. Ray Christian III was crowned AR Bodies rookie of the year as he and his team had a successful first Granite State Pro Stock Series season. Along with the rookie title they finished the season third in the point standings and won the season finale at their home track, Waterford Speedbowl. For winning the title they were awarded a certificate from AR bodies for an ABC body kit.

Also given out was the annual “John Boy Hoyt memorial dedication to motorsports award”. This award is given to someone who goes above and beyond for the sport of auto racing. The 2018 honoree was Track owner, promoter and all around friend to Motorsports, Bob Webber Sr. Webbers son Bobby Jr and his wife Jen accepted the award from series president Mike Parks who spoke of Big Bobs influence on, and dedication to the series in its infancy. “Without Big Bob and Larry Cirillo there would be no Granite State Pro Stock Series” stated Parks. “Bob would always take my calls and listen to my hair brained ideas no matter the time of day”.

There were a number of contingency awards given out including two five star bodies gift certificates that went to Barry Gray and Devin O’Connell as well as $750.00 worth of O’Reilly auto parts gift certificates. In addition to the rookie of the year award, two AR Bodies gift certificates went to Jacob Dore and Mike Scorzelli and a brand new VDL Carburetor went via random draw to series champion O’Connell. Upon receiving his new carb. Oconnell said “this is so awesome. I was going to have to buy a new carb for this year… now I’m good to go!”

Everett and Chris Bingham Through their Matco Tools Distributorship recognized the three teams that attended every race in 2018 with a $750.00 battery powered impact gun and a pair of Matco Tools Mechanics Gloves. O’Connell, Joey Doiron and Mike Scorzelli were the recipients.

The final group to be honored were the top ten in points, eight of whom were in attendance to receive their trophy’s, point fund money and be honored by their fellow competitors. Along with O’Connell and Christian, Joey Doiron, Mike O’Sullivan and Cory Casagrande received point fund money as well as product from Sunoco and New England race fuels as a reward for finishing in the top five in points. Also in attendance were sixth through eighth place point’s finishers Jacob Dore, Mike Scorzelli and Josh King who received trophys and points checks.

With the 2018 Banquet in the books its on to the 2019 GSPSS season. On tap for 2019 is a fourteen race schedule highlighted by three 150 lap events with increased purses, a very soon to be announced qualifying bonus and the return of GSPSS promotions fall festival at The Claremont Motorsports Park. It was announced at the banquet that in 2019 the spring race at Lee USA Speedway, The JBH memorial race and the Pro Stock portion of the fall festival will all be 150 laps. In addition, not only the winners share of the purse, but every finishing position will see an increase in purse money at these prestigious events. The season kicks off with a test and tune April 27 at Claremont Speedway and the opener the following Friday night.

The complete 2018 point standings as well as the 2019 schedule and more can be found at gspss.net along with all the latest series news. Also follow the series on Facebook and Twitter as well as on the web at www.gspss.net for all the latest news and highlights.