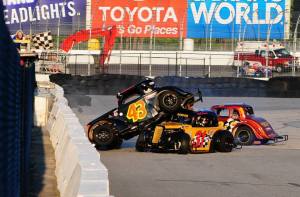 This week, we started out at the New London-Waterford Speedbowl. Unlike last week where I lost a motor, I qualified forth and was running some of the fastest lap times I have run there this season. By the end of lap one, I was up to 2nd and three laps later I was in the lead. By around lap 15 though, I was caught by 2nd place and we had a great battle but I came up just short of my first win at the Speedbowl.

Friday, I raced at Stafford Motor Speedway after coming off a 2nd place run last week. I had a very fast car for the feature. Due to the handicap system, I started the race in 7th. The entire feature was a four car battle for the lead and on a green white checker restart, the top three cars all got together and I took the lead. I ended up getting my second Stafford win of the season!

Saturday at New Hampshire Motor Speedway was one of the most eventful races I have ever been in. I started the race in third and moved into second quickly and started to pressure the leader. Toward the end of the race however, the cautions started to fly and the outside lane was not in my favor. I was in a four car battle for second for the final 7 laps. On the last lap coming out of turn four, things got crazy. One car overdrove the corner and spun down into another car. That car then shot up and t-boned me and sent me about 4 feet airborne across the line in fourth. On the bright side I did finish the race and it made for a pretty epic video!

Click here to view photo sequence of the wreck courtesy of Christopher Roy.