(Anderson, SC)— Devin O’Connell, a Madison, CT senior, fresh off a World Championship victory on the road course in October at New Hampshire Motor Speedway has done it again. This time, O’Connell found his way to victory lane at the US Legend Cars Asphalt Nationals at Anderson Motor Speedway in Anderson, SC, on November 14th. O’Connell was one of 34 entries from 17 states and Canada to participate in the three day Legend Cars season finale. O’Connell qualified on the pole and lead all but one lap to claim the victory along with the season long US Legends Cars Semi Pro National Title.

During the post race victory lane interview O’Connell stated, “This is one of the best races I personally think I have run. I can’t believe it. We won the World Finals race and swept it with this [win]. Thanks Anderson Speedway for having us. My Dad – we have done 90 races this season together this year. I can’t thank you enough for everything. There is nothing in the world I can do to pay you back for what you have done. Thanks CJ D’Addario from 860 Motorsports, Justin, Ed, Mom, and Reilly. Dreams come true. They can come true no matter what you have gone through and no matter what you have to do to chase it, they can come true and I am proof tonight.”

O’Connell’s unprecedented performance at both the World Finals and the Asphalt Nationals is a first in US Legend Cars 23 year history. Never before has a driver claimed the Road Course World Championship and the Asphalt (oval track) National Championship while winning both final races in the same season.

For the 2016 season, O’Connell will be joining Vermont based Hallstrom Motorsports, racing a full size late model car in the American Canadian Tour (ACT) and select Pro All Star Series (PASS) races. Recently, Devin tested the late model with Hallstrom at Speedway51 in Groveton, NH. Team owner Louis Hallstrom commented “[Devin] sat right in this thing and didn’t need to adjust anything in the car. He just took off. Some of the stuff he was doing out there, veterans can’t even get a hold of. He is a very talented driver and ready to go. It’s going to be great for 2016.” 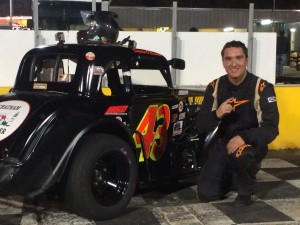