Devin O’Connell had a successful ARCA test in the #59 Lira Motorsports car at Daytona International Speedway on January 16th.  The weekend started off with rain on Friday, January 15th, canceling the first of two scheduled days of testing.  Saturday was a much different story.  Bright sunshine, accompanied by jet dryers, helped dry the 2.5 mile super speedway and the  ARCA cars hit the high banks at 10:30 AM.

O’Connell stated, “It was a good test and only my second time in a full size car.  My first time out was a solo run just so I could get the feel of the car.  My spotter also had me run close to the wall to get the feel of the air between my car and the wall.  The other times I got out, I was in a pack learning  how to handle the draft.  Overall, it was a great experience, I learned a lot, and had a blast!”

O’Connell is not planning on running ARCA’s 2016 opener at, the Lucas Oil 200, at Daytona on February 13th.  However, he would working on securing marketing partners to potentially run races later on the ARCA schedule. 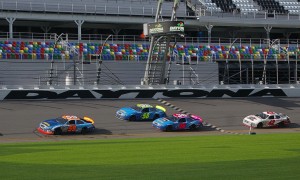