(Stafford Springs, CT)— For Madison native and U.S. Legend Car driver Devin O’Connell, the 2015 season has been nothing short of magical. The 17-year-old Hand High School senior won the 2015 Legend Cars track championship at Stafford Motor Speedway on October 3rd. Devin posted 8 wins, 17 top 3 finishes, and 20 top 5 finishes, in 22 starts at Stafford this season. His performance at Stafford and other tracks such as New Hampshire Motor Speedway (NHMS) has helped propel him to the top of the National Legend Cars oval racing points in the Semi-Pro division, and O’Connell is also the World Road Course point leader for the Semi-Pro division. Devin recently broke the road course track record at NHMS.

“This is a dream come true for me,” said O’Connell. “In 5 years of racing karts [at Stafford] I wasn’t able to win a championship. This is one of the most historic tracks in the country and it’s an honor to win a championship here. I couldn’t have done it without my Dad, The Chatham Highlander Motel, 860 Motorsports, all the fans who come out every week, NAPA Auto Parts, and Stafford Motor Speedway. I can’t believe I was able to pull it off; it’s incredible. We are top of the country right now on the oval and top of the world on the road course and it’s a dream come true quite honestly. I could not have had a better season.”

O’Connell, a Madison resident since 2006, spent 3 seasons racing in the Allison Legacy Touring Series in the Carolinas and Virginia. The family relocated temporarily to Charlotte, NC, so Devin could gain experience racing in the Allison Legacy Series where he was mentored by legendary NASCAR driver Donnie Allison. The O’Connell family efforts paid off, as Devin won the 2014 Allison Legacy Touring Series Championship and was shortly thereafter, named to the Speed51.com 2015 Short track Draft as one of the best short track racers in the country.

Devin has been racing since he was 9 years old, shortly after being diagnosed with Asperger Syndrome.  He lobbied his parents for nearly 4 years to let him participate in kart racing.  His parents were concerned if he would be able to deal with the loud noises and stress.  It was just the opposite.  Once Devin got behind the wheel in his first race, he never looked back and he has become one of the nation’s top young drivers.

Devin has had enormous personal and professional success this year.  On April 2, 2015, World Autism Day, Devin bravely announced to the racing community and to the world that he has Asperger Syndrome and conducted a charity event for Autism Services & Resources of CT, raising over $1,000 for the charity.  It is important to Devin that he show what people with challenges can accomplish.  He understands that he is fortunate to be mildly autistic and wants to be an inspiration and a voice for those who struggle across the Autism spectrum.

For the 2016 season, Devin will be joining the newly formed New England based Driver Development Program with Vermont based Hallstrom Motorsports. The plan is to race a late model car in the American Canadian Tour (ACT) and select Pro All Star Series (PASS) races.  The partnership was formed with the help of Annamarie Strawhand from Marketing at Full Speed, and the trio are actively seeking marketing partnership opportunities with New England based companies to help secure funding for the venture. Recently, Devin tested the late model with Hallstrom at Speedway51 in Groveton, NH. Team owner Louis Hallstrom commented, “[Devin] sat right in this thing and didn’t need to adjust anything in the car. He just took off. Some of the stuff he was doing out there, veterans can’t even get a hold of. He is a very talented driver and ready to go. It’s going to be great for 2016.” 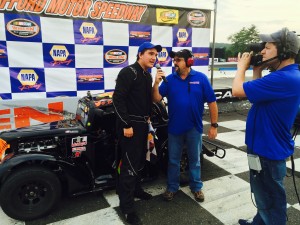