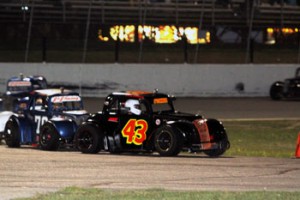 Posted on Stafford Motor Speedway Website on February 4, 2015
By Scott Running
(Stafford Springs, CT)—With the return of Legend Cars to weekly racing at Stafford Speedway in 2015, one driver who is looking forward to the experience is Madison, CT native Devin O’Connell. O’Connell is the defending Allison Legacy Series champion who enjoyed a very successful 2-race stint in the Legend Cars division last season at Stafford. O’Connell won his very first start at Stafford and then was dueling for the lead in his second start before a flat tire eliminated him from the race. O’Connell also raced 6 seasons in the Wild Thing Karts on Monday nights and the combination of his mini mile track knowledge and a good car under him has all the potential for making a championship run in 2015 behind the wheel of the #43 Chatham Highlander Motel Coupe.

“We’re planning on running the full schedule,” said O’Connell. “I’m really pumped for the season. I’m hoping that not only can we challenge for the track championship, we’d also like to win a national championship for ovals with the Legend Cars. I think we’ll definitely be a contender for wins every week. There’s some pretty good competitors that we’ll have to face and it’s going to be an interesting and tight championship for sure. We won our first race and then in the second race I made a small mistake and wheel hopped another car that blew out the left rear tire. We definitely had a car that could win the race that night. We were wicked fast but I was just in the wrong place at the wrong time. My guys at 860 Motorsports do an awesome job on the car and all the running I did in the karts gave me a lot of seat time on the mini mile, which really helped me with the Legend Car.”

O’Connell reached the pinnacle of the Allison Legacy Series in 2014 with 10 wins in 16 races, including a streak of winning 5 races in a row. While O’Connell came close but never won a championship in the Wild Thing Kart ranks, he is looking to add a Stafford championship to his racing resume. But he knows that he will face some stiff competition on the mini mile during the 2015 season, including some fellow Wild Thing Kart competitors that he has raced against before.

“I’d love to win the championship at Stafford because I had been close a couple of times before in the karts but I was always the runner up,” said O’Connell. “Obviously the DiMatteo brothers are going to be fast. Those cars are always fast at Stafford and they proved that again last year. I think Jordan LaMothe will be a big threat again and I wouldn’t be surprised to see Teddy Hodgdon to be strong this year. I’ve raced with Teddy and Mikey Flynn in karts and there’s a few people that I’ll be racing with that I’ve raced with before. Friday nights are going to feel like old times with the go karts because there’s drivers in the SK Modifieds® and SK Lights that came from karts and it’s going to be great to see them all again at the track. There’s going to be a lot more races so you’ll have to be a lot more consistent but I think it will be a lot of fun and I can’t wait to get started. It’s going to be a blast. We found in the karts that the track was always a little different year to year and it’s going to be interesting for me to learn about the NASCAR Hometracks experience on Friday nights. That’s something that I’ve never really been a part of except for the two races we ran last year and it’s something that I’m really looking forward to.”

O’Connell will kick off his quest for a Stafford championship in the Legend Cars division as part of the 44th Annual NAPA Auto Parts Spring Sizzler on April 24-26. Tickets for the “Greatest Race in the History of Spring” are on sale now at the Speedway Box Office.

For more information on the 44th Annual NAPA Auto Parts Spring Sizzler, or to order tickets, contact the Stafford Motor Speedway track office at 860-684-2783 or visit us on the web at www.staffordspeedway.com.