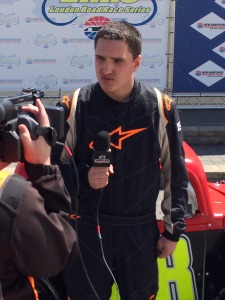 Devin kicked off the 2015 New England racing season by splitting his time between New Hampshire Motor Speedway (NHMS) and Stafford Motor Speedway.  Devin was able to practice at NHMS on Thursday followed by practice at Stafford on Friday.

The NHMS MOAT Mountain Road Course Series on Saturday began with an 8:00 am qualifying session. Devin qualified 4th of the 18 car field.  At the drop of the green flag for the feature race, Devin settled into 4th and worked up to 3rd where he remained  for the balance of the race.

Following the NHMS race, Devin piloted the team truck and car hauler toward Stafford while his crew (Dad) finished up in post race tech at NHMS. Devin and crew managed to arrive at Stafford with plenty of time to make the qualifying heat races.

Devin started 4th in the first of two Legend heat races and finished 3rd, placing him on the outside of row 3 for the start of the feature (6th in the 18 car field). Early in the race, Devin was hit and spun on the front stretch. As a result of the caution, Devin was sent to the rear of the field.

The caution ridden race saw Devin try to work back up to the front, but he was blocked by wrecks on 3 occasions and sent to the rear each time. On a lap 14 caution, Devin was still mired back in traffic. However, his efforts over the next 2 laps, with the assistance of even more cautions, enabled him to move into 3rd place by lap 16. The race was called on lap 16 as a result of the tremendous number of cautions.

Sunday was the second race of the NHMS MOAT Mountain Road Race Series double header. Devin qualified 3rd in the 20 car field for the feature. He settled into 3rd for the first 8 laps and by lap 9, he was contending for 2nd. He managed to take over the 2nd spot a couple of times but could not hold the position over veteran driver Justin O’Brien Laps 9 through 12 were exciting to watch as Devin continued to dual for the 2nd spot, but crossed the finish line in 3rd.