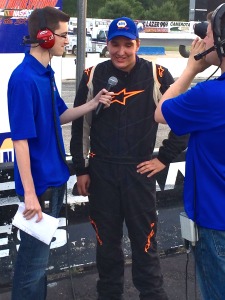 An ambitious attempt of 4 races in 3 days was on the schedule for Devin O’Connell Racing this past weekend.  Already at a disadvantage with the road course car still not complete after a crash at New Hampshire Motor Speedway on May 16th, the bad news continued to pile up.  The weekend would start off with a blown motor at New London Waterford Speedbowl on Thursday, May 28th.  During practice, Devin set the fast lap time just before coming off the track reporting that the car was slowing down.  After careful examination of the car, it was discovered that the motor was seizing up and Devin would not be able to make the feature race.

On Friday, after an all night motor change and conversion of the car to a road course setup, Devin took to the Thompson Motorsports Park road course for a full day of practice and qualifying for Saturday’s “Open Wheel Weekend.”  Devin would qualify on the pole for the first of two Saturday races, only to find that the ride heights on his car were found to be too low in post qualifying tech.  Devin would have to start at the back of the field for Saturday’s first of two races.

Immediately after qualifying, Devin and his crew of one, packed up to head Stafford Motor Speedway for the Legends Friday night race program.  Arriving late, Devin missed the 2 practice sessions and qualifying and would have to start the feature race from the back of the pack.  With some help from Matt Maring of 860 Motorsports, the car was converted back to an oval race setup in plenty of time to make the feature race.

The 20 lap Stafford Legends feature began with a yellow flag immediately after the green flag with a pileup of cars before the start/finish line.  Devin would use this and a second caution to move from 13th to 7th before the 2nd lap was complete.  By lap 3, he was up to 3rd place and by lap 13 he would move into 2nd.  Devin would finish the night in 2nd overall with a Semi-pro class win.

Once again, the car was converted back to a road course setup and the team headed back toward Thompson, CT.  On Saturday morning, Devin would start 7th of the 11 cars in the first race of the day.  The green flag dropped at 9:00 am and Devin was able to move quickly up to 4th place and eventually into 3rd place.  Devin would finish in 3rd overall with another first in the Semi-pro class.

Qualifying for the second feature race of the day would find Devin in the 3rd starting position, only .03 behind the 2nd place qualifier.  This would set the tone for an epic 12-lap battle between the top 4 race contenders.  The 12-lap feature would find each of the top 4 drivers take the lead at some point of the race.  During the entire 12 laps, the cars ran so closely at times, it is amazing that they did not make contact with each other.  Speeds in the draft of the main straight stretch were clocked earlier in the day at 118 mph.  Devin stated at the end of the race, “it was one of the most epic race battles I have ever had.”

Devin would finish the race 2nd overall less than a car length behind the winner as he attempted to slingshot out of the draft on the front stretch before crossing the start finish line.

An in car video of the race can be seen by clicking the following link: Thompson Legend Car race video.