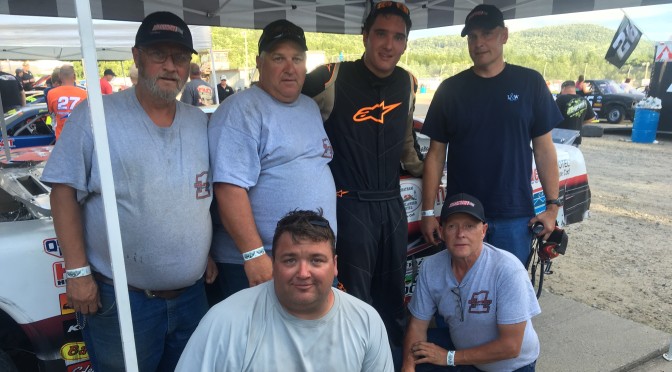 Devin O’Connell and Hallstrom Motorsports earned their first top ten in the American Canadian Tour at White  Mountain Motorsports Park on July 24th.  O’Connell also regained the lead in the rookie points standings and earned one of the American Racer Three Star Awards.  The rookie qualified 20th among 31 contenders.  Shortly after the start of the race, on about lap 19, O’Connell was hit in the left rear and spun in turn two to bring out the caution.  O’Connell restarted in 28th position and managed to avoid trouble for the remaining 150 laps and found himself in 7th with just a few laps to go.  O’Connell fell back to ninth but regained one spot to finish eighth.

The American Racer Three Star program will continue in 2016. The program is designed to recognize three teams in no particular order of performance that had outstanding races at ACT US Tour events. There are no specific criteria for deciding who might receive the award of a free American Racer Tire (value $125.00), but a special effort by a team, exceptional race, just plain old hard luck, or other accepted reason to give the award is used to decide the recipients.

The three stars are chosen by officials and winners will receive certificates for the use of a free American Racer tire at a future Tour race of their choosing during 2016.

The awarding of the stars does not allow for anybody in the top three to receive the recognition.

After the Saturday postponement, the perfect race day Sunday also brought fans one of the most competitive ACT races on the 2016 Tour. Fans got treated to three +5’s and three +4’s during qualifying heat races. Throughout the field the ¼ mile was working in both lanes during what was arguably the best and most competitive heat qualifying racing of the year! The ACT teams, in an hour, put on a terrific feature event, again one of the best of the season. The finish with Dillon Moltz and Eddie MacDonald was a treat for all in attendance, and the top fifteen teams had many race-long battles. With 9 races down, and just four to go as we head to the finale at Thompson in October, the battles for top ten positions is intense. It looks like many shuffles may still occur before the season ends. Just a great effort by all in attendance. Beech Ridge has become one of the favorite stops over recent years and is next up on August 6.

MIKE ZITER, Barre, VT— 54VT   — The second half of the sophomore year of touring seems to have brought the 54VT team to another level. Mike Ziter and his team have consistently raced in the top 10 from midway of the 2016 campaign. Starting 23rd on the ¼ mile at White Mountain, Mike once again raced into the top ten and ended up with an impressive 7th place finish. Mike came up through the weekly wars at Thunder Road and elected to take his Late Model program touring, instead of cutting his teeth in Late Models at the familiar high banks of Thunder Road. That decision over half way through the second year of tour racing is now paying off for a team that seems to have as much fun as anybody at the race track. A well-deserved American Racer Star of the Race was well earned by the Mike Ziter team at White Mountain.

DEVIN O’CONNELL, Madison, CT –1VT—This former young world class Allison Legacy and Legends driver decided to join the Hallstrom Development team and run the 2016 ACT campaign. Most first-time drivers who have experience driving stock cars, don’t start with a rules package as restrictive as the competitive ACT stock car. They find out that the “momentum” cars are, at best, different, and at least, take a good amount of time to figure out how they are different from horsepower cars. Devin immediately showed lots of promise. He tested well. His first race efforts, although not consistent at times, showed lots of raw talent. He faced average fields of over 30 cars at each event. He visited 9 different race tracks of various configurations from the ¼ miles at T-Road, Speedway 51, Seekonk and White Mountain to 1/3rd miles at Waterford, Lee and Oxford. His effort at White Mountain, with a field of 31 cars and starting 20th, earned an 8th place finish at the end of the 150 laps. This race consistency and results can provide a major turning point for this young team. For Devin’s continued improvement and outstanding race at WMMP, the O’Connell team is worthy of receiving a Star of the Race Award for what was a great effort for this young team at White Mountain Motorsports Park.

JONATHAN BOUVRETTE, Blainville QC –41QC – This Star is awarded because the Jonathan Bouvrette team simply demonstrated what short track used to be like, and more importantly, the pure love of the sport. The 41QC team raced late into the evening at Montmagny, Quebec on Saturday night in a SERIE ACT rain make-up race. He finished second. Because they heard that the White Mountain US ACT race was postponed until Sunday, this team drove through the night to be at the opening of the WMMP pits on Sunday morning. They knew there was a good car count at the event and no guarantees they would even get into the feature. They had little experience at WMMP’s ¼ mile, but the effort they put in was a reminder of what short track tour racing used to be like. (In the 80’s and early 90’s the Tour used to race as many as 33 races in a season, often with double header weekends!!) This throw-back effort by the Bouvrette team is based on their dedication to Tour racing, their positive attitude, and the big effort made to support the US ACT event. It is also because they ended up with a solid 12th place finish in a very good field of competitive race cars. They are well deserving of an American Racer Star of the Race Award. Tip of the hat to the 41QC and Merci Beaucoup!