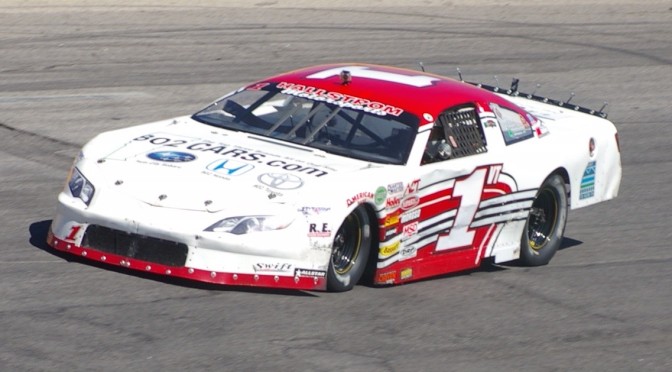 In the week before the test there were many conversations at the dinner table about what was needed for the test, preparing the car, track time secured, crew members set, photographer set, video equipment set, lastly, everyone clear on their roles. For our family it was as if we were preparing for another race; however, this time our driver was new. There was a buzz in the shop unlike a regular race week. The energy was electric. Our extended family, the Hallstrom Motorsports crew, was just as excited as we were for Devin’s test. Everything was clicking. The car was prepped and loaded for an early morning departure to Speedway 51.

As the hauler pulled up to the gate at the track, in comes Devin & Sean O’Connell right on cue. It was a beautiful day, blue sky, slight breeze, low 70s and not a cloud in the sky. What more could you ask for?

The day’s agenda was to get Devin fitted in the car, get him comfortable and make sure the radio communication was set and working. Louis Hallstrom and Troy Wheeler went over the car with Devin and answered questions. They spoke with him about communications on the track and how the first segment of laps should be run.

Devin was a quick study so he was strapped in, given a few more last-minute instructions and sent on the track. After a few laps getting used to the feel of the car, he was off and running. It didn’t take Devin long at all to get comfortable, hit his marks and lay down some pretty quick laps.

One of the highlights of the day was when Devin was told to bring the car in, the first round was complete, when he rolled into the pits and took his helmet off his smile was a mile wide and his eyes were twinkling. Again, the word I would use is excitement. This 17-year-old from Connecticut had just hopped into a full-body stock car for the first time and nailed it!

Louie and Troy spent time speaking with Devin about the chassis, the tires, braking, setups, etc. Each grouping of laps run were extremely consistent and smooth no matter what combination of tires they gave him and no matter what changes they made to the car.

Midday there was a break for lunch. Subs were brought in from Batch’s Deli in Groveton. This allowed for more race talk and led to my second highlight of the day, Evan and Devin sitting in the back of the hauler eating their subs watching the GoPro videos of the on-track footage. The back and forth conversation was priceless and Devin’s mentorship stepping into a leadership role helping Evan with racing tips was incredible and heartwarming.

The afternoon consisted of more groupings of 50 lap runs and providing feedback. Devin ran approximately 200 laps. The overall consensus was that Devin could handle the late model without a problem. His consistency, focus and car control were incredible.
The plan from here is Devin wants to run the American Canadian Tour full time in 2016. Devin will be the house driver for Hallstrom Motorsports as well as work with the younger drivers that are enrolled in the program. Evan Hallstron will be running in the Dare Devil Division at Speedway 51 for 2016.